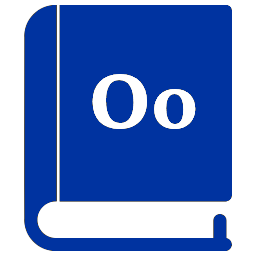 Obbligato - (Latin, Italian) "to oblige, fixed"; a musical passage or part which is pertinent to the composition; play as written; a part which must be included

Octatonic - any musical scale with eight notes; a series of eight notes to an octave in which tones and semitones alternate; Below: octonic scales

Octave - (Latin) "eight"; the interval between notes in which one tone is twice the pitch frequency of the other, or an octave apart; an eight note diatonic scale

Octave mark - notation directing musicians to play an octave higher (above) or lower (below) the written part; Right: Octave mark

Octuple-whole-note - (Latin) "of eight"; note that is sustained for eight full bars

Octuple-whole-rest - (Latin) "of eight"; a rest which is sustained for eight bars

Oeuvre - (French) "word"; a work of art or a complete body of artistic works

Ohne Dämpfer (German) "dampening"; without a mute; direction to refrain from using a mute to soften the tone

Ombra Scene - (French, Italian) "spirit, shade"; an operatic scene set in the 'underworld' which portrays the conjuring of spirits or demons

Opera - (Italian) "labor, work"; a musical theatrical drama in which the actors are singers with the majority of acting parts  sung as opposed to spoken as in a play

Oppure - (Italian) "or instead"; alternate method of performing indicated by notes or an additional staff; also ossia

Opus - (Latin) "work, work of art"; a method of identifying compositions by use of numbers by chronological order of production; abbreviated 'Op' for a single piece or 'Opp' for a series of works

Oratorio - (Italian) "to pray"; music composed in the 16th century for the 'Church of the Oratory of St. Philip Neri' in Rome; a large work involving a priest and sermon with choral hymnal, choir, and soloists, later with full orchestration

Ordinario - (Spanish) "normal"; 'naturale'; an instruction for bowed strings to discontinue a former command and return to playing the written part normally

Organ Trio - a Jazz or Rock music, an early 20th centur trio ensemble of an organ with two other instruments, typically electric guitar and drums

Organology - the science of musical instruments and their classification encompassing history, culture, and technical aspects of its sound production

Ornament - notes added for embellishment of a melody

Ornamentation - (Latin) " decoration"; notes or other embellishments for decoration of the music to add emotion and style per the written symbol; one of the many notation symbols of musical embellishment; Right: see notations

Ossia - (Italian) "instead of"; use of an alternate method of performing a piece indicated by footnotes or an additional alternate staff; also oppure

Ottava - (Italian) "octav"; a prefix denoting an octave higher written above the staff or an octave lower when written below the staff

Overture - (Old French, Latin) "aperture"; an introduction into a more dramatic musical performance such as an opera or ballet, established in the 17th century, with a fast moving style progressing into a slower movement and returning to the fast (fast-slow-fast), then converted to the opposite of a slow-fast-slow style of intro about a century later

OVPP - abbreviation meaning "one voice per part"; the practice of using solo voices on each musical line or part in choral music