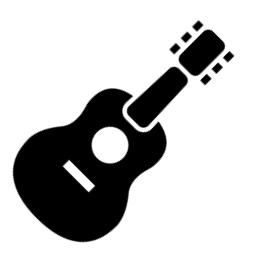 The Classical Guitar is very popular and prized for its roles in folk and classical traditions. Born of the Spanish guitar, the regions where significant developments in the instrument were made and gained wide popularity during the Renaissance. By the 16th century its use was spreading across Europe. Today's version of the classical guitar came to us through the works of Spanish craftsmen of the 18th and 19th centuries, presenting its arrangement of six strings, metal struts, size, and resonance. Left: Brandon Acker demonstrates the acoustic guitar on an original Romantic period 1888 Torres guitar, now worth near $300,000.

The basic guitar concept has been around for near 4000 years when ancient stone depictions of the first stringed instruments, the vithara or the Spanish quitarra were first discovered, though these were really more of a a lap harp or early lyre, likely predecessors of other early stringed instruments. Many different types of guitars have been developed from existing instruments.

The modern guitar gets its name from the German zither which comes from the Greek cithara, all from the cittern group of instruments. The guitar is among the four main Hornbostel-Sachs classifications of instruments established in 1914,  the chordophones, which produce sound by way of vibrating strings stretched between two points. With six strings it is tuned respectively from its top largest and lowest pitched string to its bottom smaller and highest pitched string in E2, A2, D3, G3, B3, E4. Its lowest pitch tone, the second 'E' below middle C and its highest pitched tone 'B,' almost two octaves above middle C, give the classical guitar a range of about two octaves.

Guitars like the Classical and modern acoustic guitars typically carry 12 to 16 frets and electric fourteen to nineteen frets, the latter slightly extending its range. The early classical guitar had strings made of gut or nylon. Modern versions carry mainly metal strings, often with higher pitched strings of nylon and lower pitched strings of metal wound around a nylon center. The classical acoustic guitar is generally constructed of wood.

Diagram of the Classical Guitar 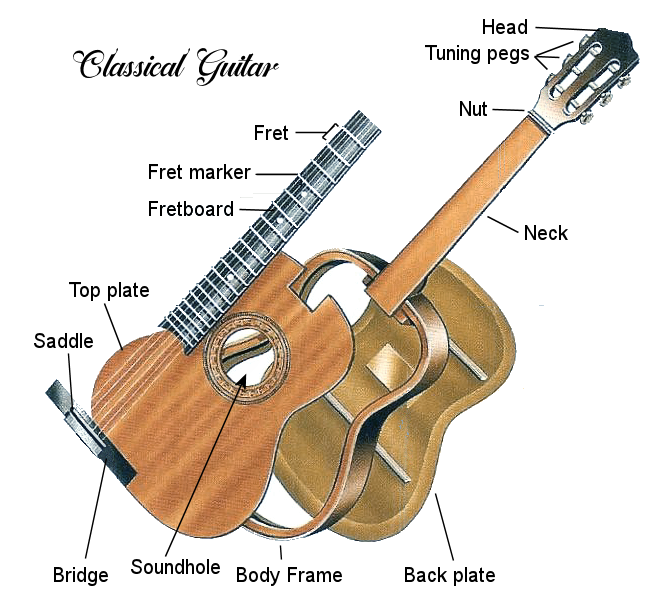 Use of the Guitar

The guitar player holds the instrument in front either resting on the legs when seated or hung by a shoulder strap when standing.

The player holds the neck with the left hand with the thumb underneath.

The left hand fingers press the strings at different points across or up and down the fingerboard to produce the different pitches of tones and chords. 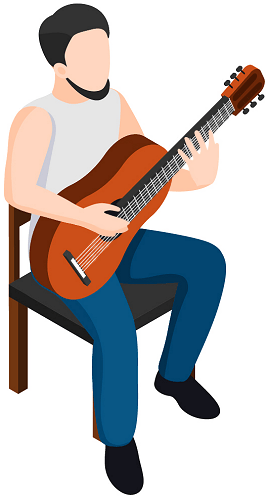 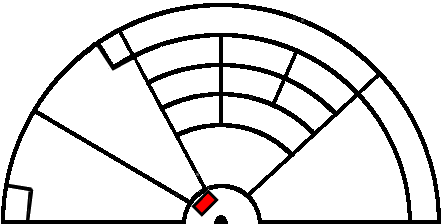 This is the general area where most vocal or instrumental soloists will perform.

There are many guitar playing composers throughout the ages of its use including French Hector Berlios, Austrian Franz Schubert, German Carl Maria von Weber to name just a few during the Baroque to Romantic periods. There are also many compositions written specifically for the guitar and its classical version. The Spanish guitar soloist Francisco de Asís Tárrega y Eixea took numerous pieces from Bach and transcribed them to the classical guitar. Later, many modern composers too would write works specifically for the guitar such as Englishman Benjamin Britten, British Sir  William Walton, and Spaniard Joaquin Rodrigo during the 20th century.

Many different types of guitars have been invented or developed from existing instruments. We have acoustic guitars, acoustic cutaway guitars which extent a player's reach toward upper frets, as well as acoustic resonators. Resonators are highly resonating guitars constructed with a round wall with multiple openings inside the sound hole and covered with an evenly perforated metal pan; it's often played with a finger mounted slide. The classical guitar is an acoustic instrument meaning it has a hollow body and a sound hole to produce a more resonant amplified sound. It's been said that due to its melodic nature, 'you cannot make a nasty noise.'

In the 20th century, the guitar became electrified and played through an electronic, solid state, or digital amplifier. Acoustic types are still in widespread use but electric guitars have been developed over the need to provide specific sounds for numerous modern musical styles. There's basic electric guitars of many constructed shapes, most with cutaway bodies; then solid body guitars constructed from solid wood or other materials, and hollow bodies which are constructed similar to an acoustic with an outer casing or frame over an open internal body; hollow body guitars developed to produce sound with a broader resonance.

We also use bass guitars, both acoustic and electric, to perform the bass part in several types of bands and ensembles. Bass guitars may come with four, five, or up to six strings with a lower pitched and larger string added for an extended range of low notes. Modern acoustic and electric guitars typically carry six strings but may have any number of strings up to twelve. Twelve string guitars provide a harmonic effect by pressing two strings at once on the same fret. The 'doubled string per finger' method produces a harmonic tone or the octave tone. And lest we forget the lowly cigar box guitar, which is just that, strings stretched over a cigar box with an attached neck and tuning head. And the silent guitar, which as an electric guitar produces no outwardly audible tone so is primarily used for silent practice by players wearing headphones. Illustrations of these and other types of guitars and chordophones are displayed in the String Section.

The guitar is one of the most played and popular instruments of all time, mostly due to it's versatility, ease of play, and portability. It is used for accompaniment in many types of music ensembles, solos, and orchestral music. It is so easy to play that even beginners can produce good music. 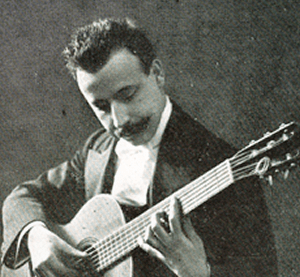 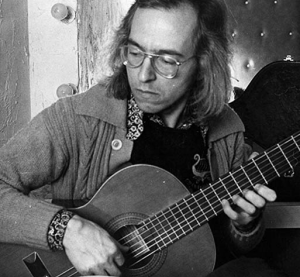