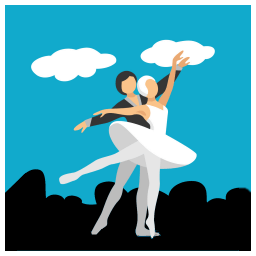 Ballet has been entertaining audiences for over 400 years, since the 17th century though other forms of theatrical dancing date back as far as ancient Greece. French composers Jean-Baptiste Lully and Jean-Phillippe Rameau are given credit for incorporating stately dances into elegant ballet scores for their operas during the 1600s. The word ballet is Italian born of its root 'balletto' meaning 'little dance.'

The ballet became more popularly renowned during the Romantic Period primarily due to its becoming much more dramatic and musically fulfilling. Tchaikovsky wrote several ballet masterpieces in the latter 19th century taking ballet to new heights of popularity among composers and audiences with such works as 'Swan Lake' and 'Sleeping Beauty.' This march of influence on the ballet continued into the 20th century mostly thanks to Russian composer and impresario Sergei Diaghilev and his 'Ballets Russes.' After impressing Paris creating quite a craze, the France based ballet composing and dance group performed all over Europe up to about 1929. The 'Ballet Russes' never performed in Russia due to the ongoing revolution and unrest. They were particularly fond of writings from Russian born composer Igor Stravinsky whose most notable work remains 'The Rite of Spring.'

20th century composers took the ballet even further into the secular world through incorporation of modern musical forms like jazz and even atonal styles utilizing all twelve tones of the 12 edo chromatic scales. Composers the world over had grown weary of the Russian influence on both the opera and ballet so in the 20th century, new compelling operas and ballets were birthed of Germany, France, The United States, and more. The ballet remains a staple of opera houses and the symphony orchestra's repertoire. So far I believe that Soviet composer Rudolf Nureyev has the spot of the most renowned and popular French ballet, 'The Nutcracker' which took the Paris stage in 1985 along with its formal audiences.

Dances from 'Orpheus and Eurydice'