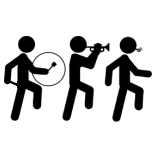 A March is musical piece in which the tempo and main beat is set to match the steps of the parading bands, soldiers, or other marching performers or showmen. The tempo can be a slow as funeral steps or as quick as marching bands in double-time. The drumbeat of the march is generally exaggerated so that it will be heard above not only their footfalls but other instruments in the presence of crowds and onlookers.

Marches are normally composed for celebrations, preceding significant events, or in honorary tributes. Being a tribute, marches have been performed by military bands as soldiers march to war or in royal courts and symphony concerts to honor a host, guest, or dignitary.

It was a 17th century court composer of King Louis XIV, Giovanni Battista Lully, who first composed the march initiating the attention of other European composers who took up composing the musical form as well. The operas of Verdi and Wagner at times featured processional marches. Haydn took the opposite approach writing his military 'Symphony No. 100,' a slow moving type of march.

Marches have been used and composed from the latter 1600s up to present day. During the second half of the 19th century John Philip Sousa composed 'The Stars and Stripes Forever,' the national anthem of The United States of America. "When Sousa wasn't playing with a band, he was writing music. By the 1890s he had written enough popular marches to be nicknamed the "March King." (Source: John Philip Sousa, “Stars and Stripes Forever,” published in Cincinnati, Ohio, 1898).

Another U.S. military march 'Battle Hymn of the Republic' was a companioned effort written around 1855 by lyricist Julia Ward Howe and music composer by William Steffe. The tune has religious bearings along with being a military march. It is known as a declaration of the destruction of the wicked in end times. I suspect that the march, like many musical forms of similar periods, will be with us forever.

'Whom Shall I Fear' (God of Angel Armies)