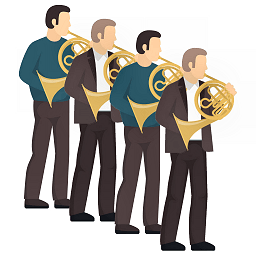 In similarity to its cousin the fugue, the Canon is a form of musical counterpoint. Where the fugue has voices which follow the melody returning to it, the canon has overlapping voices of repetition or imitation. The simplest type of canon is a round where one voice enters with the main melody then another begins before the first voice is complete overlapping it with the same melody; a third voice may follow also. 'Three Blind Mice' is a good example as is 'Frère Jacques' and 'Row, Row, Row Your Boat.'

Also like the fugue, the canon was popular among composers of the Renaissance into the Baroque periods. J.S. Bach was renowned for composing brilliant canons as in his 'Goldberg Variations' of 1742. The most famous of canons, 'Canon and Gigue in D,' was written by German composer Johann Pachelbel in 1695.

As music entered the Classical period, the canon lost favor with composers of Classical and Romantic music. Canons are one of those musical forms which often exist within other larger compositions. It would be well into the 20th century before the canon would be revived by innovative composers looking to make a creative mark on the musical world. Austrian composer, Anton Webern, born of the "12 tone Viennese" style, made an impression with his 'Concerto Op. 34' in 1934 followed by American song writer Frank Loesser, who in 1950 wrote his catchy little round 'Fugue for Tinhorns' for the musical comedy 'Guys and Dolls.' Pierre Boulez too returned to the demands of canonic style a few years later with 'Le marteau sans maitre.' Today the canon remains loved by audiences the world over.

'Canon and Gigue in D Major